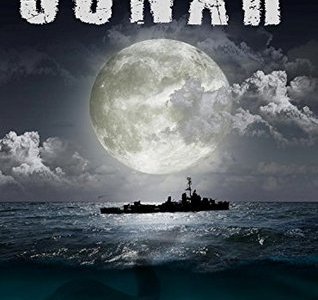 I don’t typically enjoy war stories, specifically those set during World War 2. However, Jonah being set at sea made it stand apart from other books I’ve read from the same time period. Being on a ship inherently creates tension, since there is no escape, and Carl Rackman leans heavily into this. Moreover, this novel has very little combat (other than a battle scene at the very beginning), and is more a look at naval life, with a supernatural undertone.

The book focuses on the life of Mitch Kirkham aboard the US Navy destroyer Brownlee. After surviving a horrific battle, the novel explores Mitch’s naval experiences, and through his interactions, other experiences of different characters. It deals with PTSD and bullying, before switching direction with the introduction of ‘The Brownlee Beast’.

I thought that the character of Mitch was excellent, as Rackman made him feel relatable by having him grapple with moral quandaries. He means well, but doesn’t always make the best choices – similar to most real people. Furthermore, it is very easy to feel sympathy for him, as he often gets into bad situations through no fault of his own.

Many of the supporting characters were also good, with my favourite being Doc. While not actually a doctor, he had rudimental medical training as the pharmacologist onboard. I felt drawn to his strong moral compass and his relentless work ethic. While many of the other characters were strong, I would have liked more development of the captain since he appears in quite a few scenes without us really understanding his motivations.

The author’s deep naval knowledge was obvious, but technical vocabulary never impeded my reading. He created a glossary at the end of the book, but I never felt the need to use this, since he did such a good job of making the meaning of new words obvious by the surrounding paragraph. It felt very well blended.

I don’t want to talk about the themes for too long, as I can’t mention some of the most interesting ones in case I spoil anything. However, I found the examination of chain of command very interesting, as well as the somewhat toxic culture that was found aboard the ship. That being said, the main aim of this book seems to me to be to entertain, which it does very well.

The mysterious element of the book is handled very well, and it kept me guessing until the final reveal. The action is also paced very well, with the tension staying with me long after I’d put the book down for the night.

However, I found the ending to be unsatisfying. The pacing was again good, and it felt like a proper climax, but the resolution just felt too perfect. There were also flashbacks interspersed throughout the book that, while I didn’t dislike them, and thought they were very well written, didn’t seem to add anything to the plot as a whole.

Overall, this book was a 5.5 out of 7 for me. It was easy to get into and this ease of reading continued throughout. The few small things I wasn’t a personal fan of are easily outweighed by the well-crafted plot and relatable characters. I would recommend it to anyone who likes thrillers, especially historical ones, as well as fans of psychological horror (since it shares some similar elements, while not strictly falling into that genre).

The Never Ending Chronicles of Jawahir the Bookworm

A bookish blog among other things

A fangirl's guide to YA books

Show This Book Some Love

Reviews of a Bibliophile

The Brandon and Luke Show

Two Good Friends on Opposite Ends of the Political Spectrum

Book Reviewer, Avid Reader and Bookworm. Campaigning to link more readers to writers. People do not forget books that touch them or excite them—they recommend them.

A Bolt out of the Book

A literary blog where books are electrifying

Stories and photos from Scotland

For Book Lovers and Random People

We are all in the gutter, but some of us are looking at the stars. Oscar Wilde

Reading with My Eyes

lots of tales from the spine, your place for book reviews of all kinds

just an author doting on everyone else's writing

Hey Did You Know I Write Books

Just a teen sharing her thoughts and living her rollercoaster life. All positive vibes here!